Previously, we found that seven years of allotted prophetic time is yet unfulfilled.

For then shall be Great Tribulation, such as was not since the beginning of the world to this time, no, nor ever shall be. (Matthew 24:21 KJV)

We determined that the second half of this prophetic week is the Great Tribulation period that Elohim is forewarning us about.

We further determined that 1) the confirmation of a covenant in conjunction with 2) the construction of the yet-to-be-built third Temple are the two events that will indicate the start of the Final Seven Years.  And when these two events do occur…

… 3 ½ years will remain for “the Remnant” to get to Elohim’s divine Place of Refuge in order to physically escape the predicted apocalypse and to greet the Son of Man at His return.

Determining the exact number of days between the start of the Final Seven Years and the beginning of the Great Tribulation will be the focus of this article. 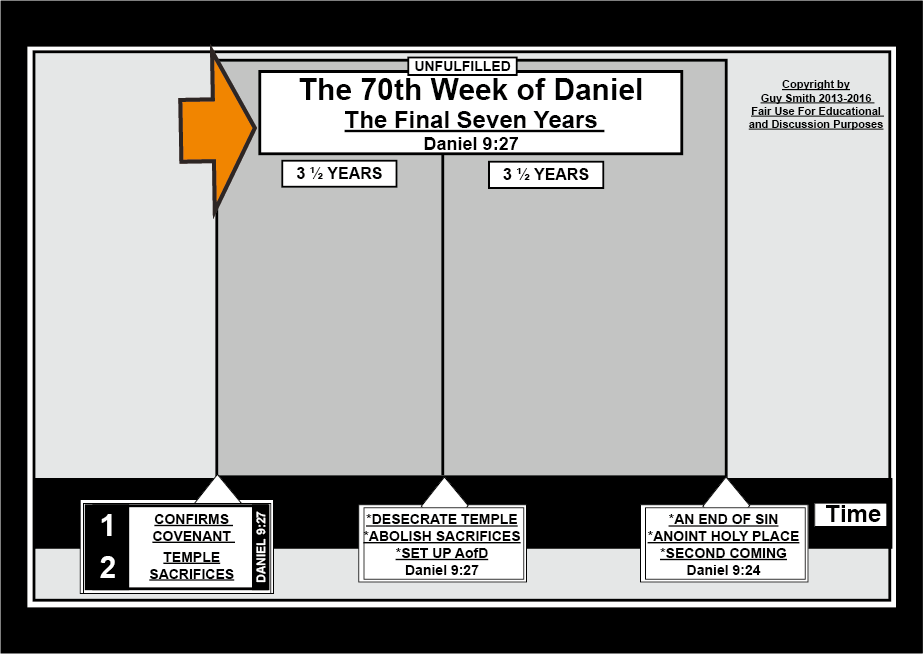 We begin by comparing the 70th Week of Daniel …

… with The Son of Man’s end time scenario described in Matthew 24.

And he shall confirm the covenant with many for one week: and in the midst of the week he shall cause the sacrifice and the oblation to cease, and for the overspreading of abominations he shall make it desolate, even until the consummation, and that determined shall be poured upon the desolate. (Daniel 9:27 KJV)

Next, I would like to point out that Daniel broadly divides the Final Sevens Years into two 3½ year periods… 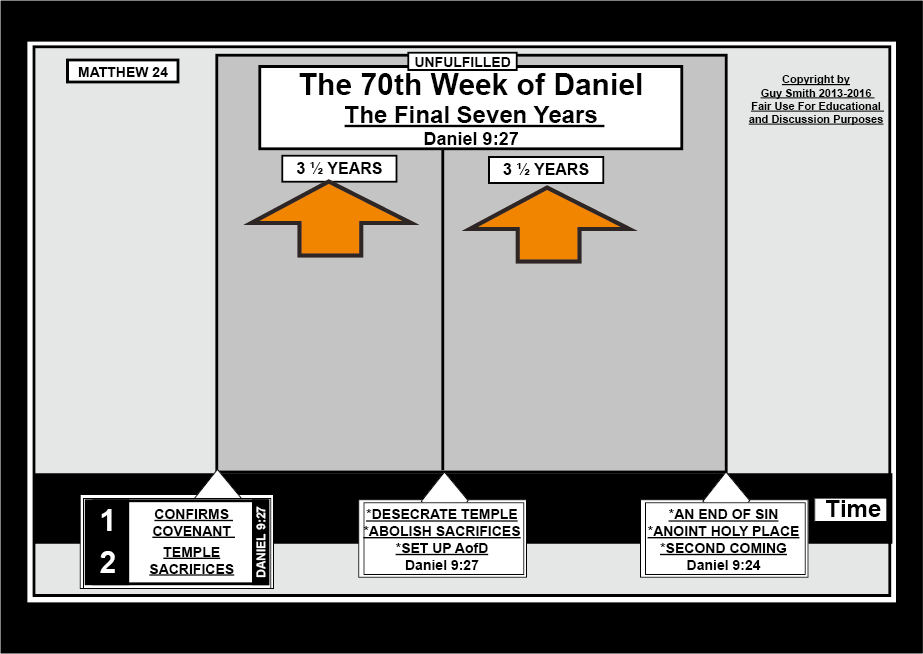 Seventy weeks are determined upon thy people and upon thy holy city, to finish the transgression, and to make an end of sins, and to make reconciliation for iniquity, and to bring in everlasting righteousness, and to seal up the vision and prophecy, and to anoint the most Holy. (Daniel 924 KJV)

…which concludes with the second coming, where The Son of Man defeats the nations of the world, puts an end of sin and as High priest will anoint the Most Holy Place in preparation for the New Jerusalem’s descension to Earth. 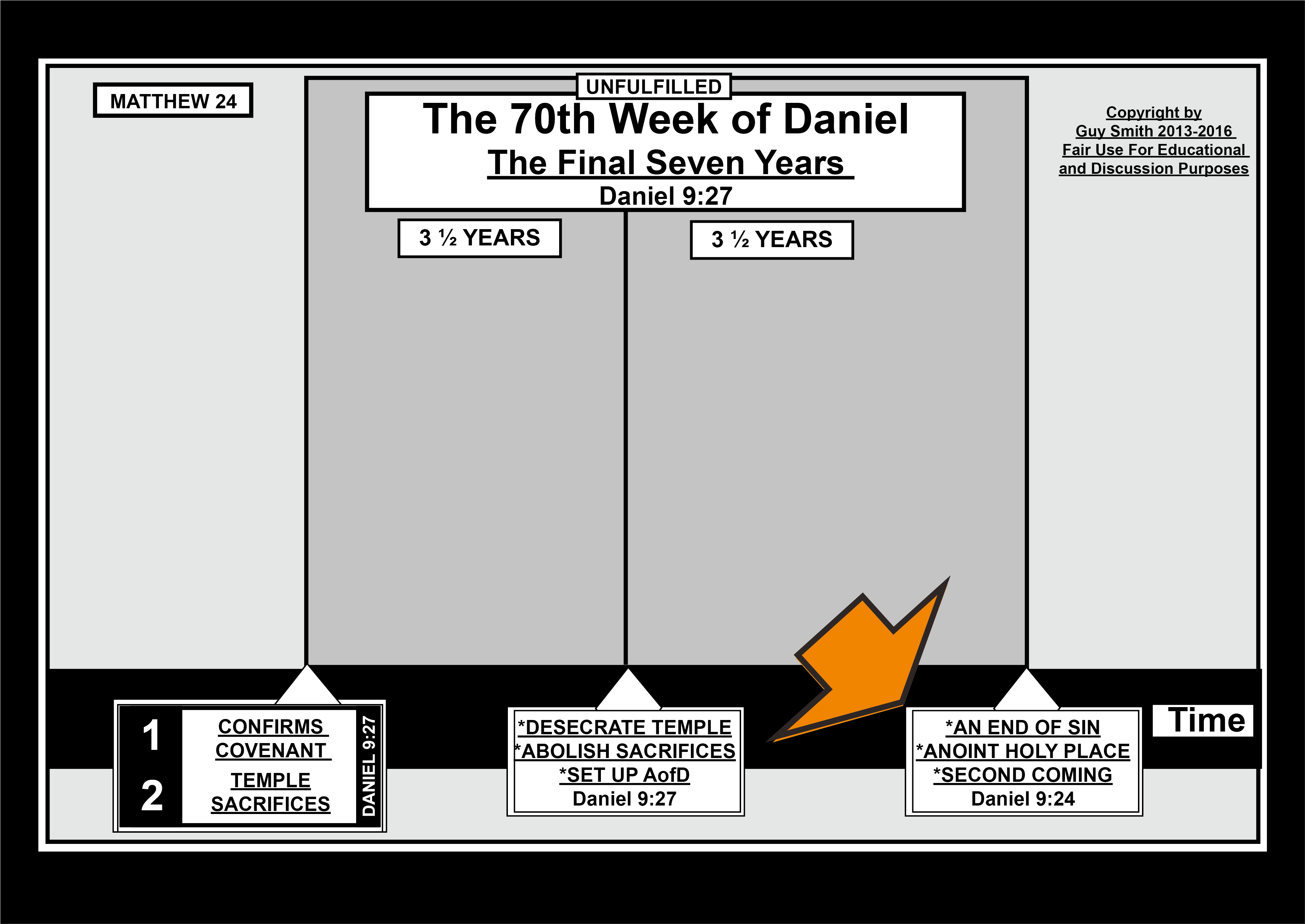 Behold, the Day of יהוה  comes, and your spoil shall be divided in your midst. (Zechariah 14:1 KJVm)

This glorious day is referred to as “the Day of יהוה.”

A close analysis of Matthew 24 reveals that the Son of Man further divided the remaining seven years into four smaller periods of time.

Matthew 24’s fourth period concludes with advent of the Son of Man coming in the clouds.

And he shall send his angels with a great sound of a trumpet, and they shall gather together his elect from the four winds, from one end of heaven to the other (Matthew 24:31 KJV)

…which is “the Day” of the first resurrection…

Blessed and holy is he that hath part in the first resurrection: on such the second death hath no power, but they shall be priests of Elohim and of Messiah, and shall reign with him a thousand years. (Revelation 20:6 KJVm)

…and the first “Day” of the Son of Man’s Millennial Reign. 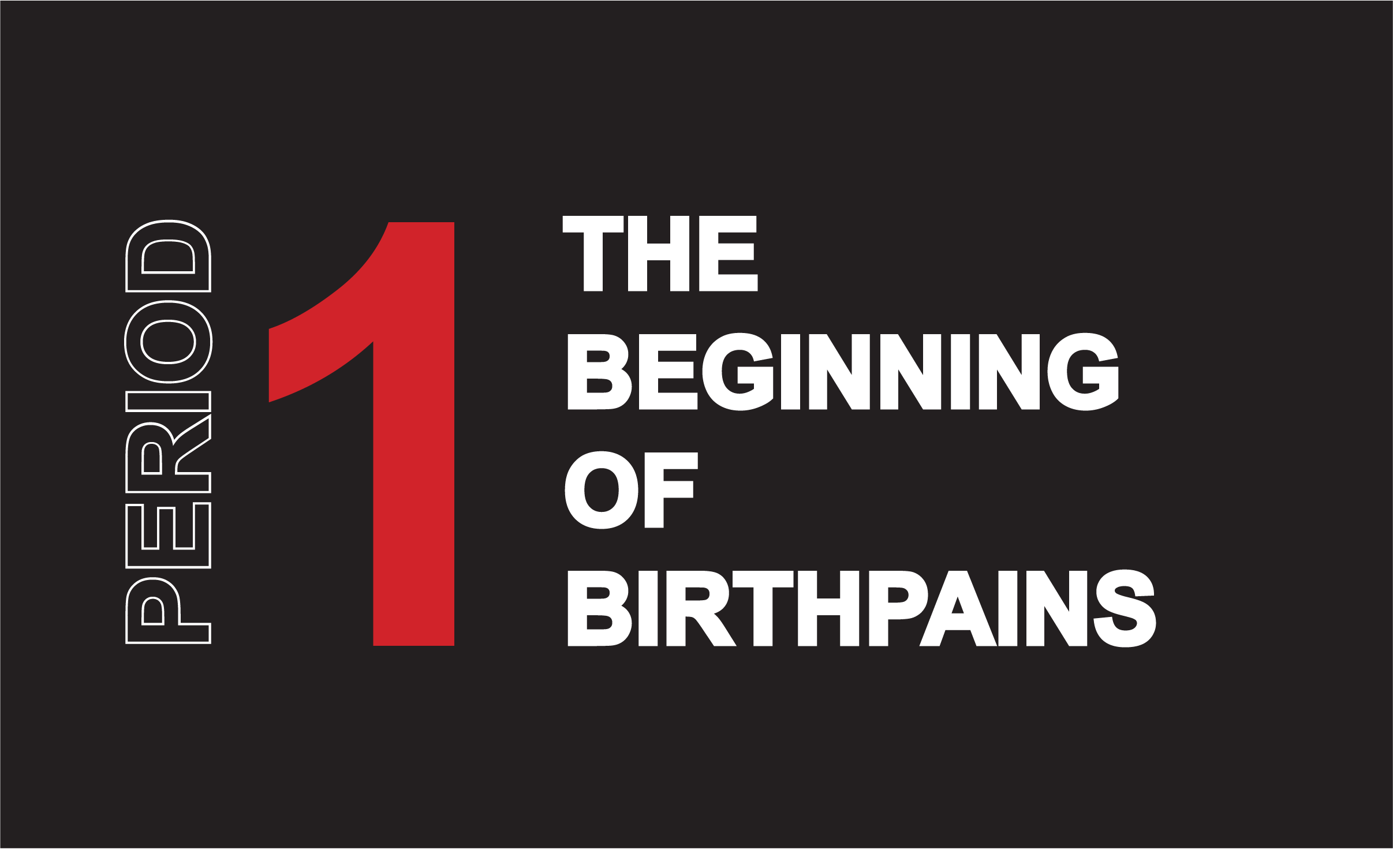 And as he sat upon the mount of Olives, the disciples came unto him privately, saying, Tell us, when shall these things be? and what shall be the sign of thy coming, and of the end of the world? (Matthew 24:3 KJV)

The first period begins with the disciples asking the Son of Man  to describe those events which will lead up to His return.

And ye shall hear of wars and rumours of wars: see that ye be not troubled: for all these things must come to pass, but the end is not yet. (Matthew 24:6 KJV)

The Son of Man responds by describing wars…

For nation shall rise against nation, and kingdom against kingdom: and there shall be famines, and pestilences, and earthquakes, in divers places. (Matthew 24:7 KJV)

All these are the beginning of birthpains. (Matthew 24:8 NIV)

He further compares these events to the beginning of birth pains.

These proverbial contractions are found in the first half of the Tribulation Period which initially start out mild, but as time progresses these contractions become longer and stronger with less time in between. 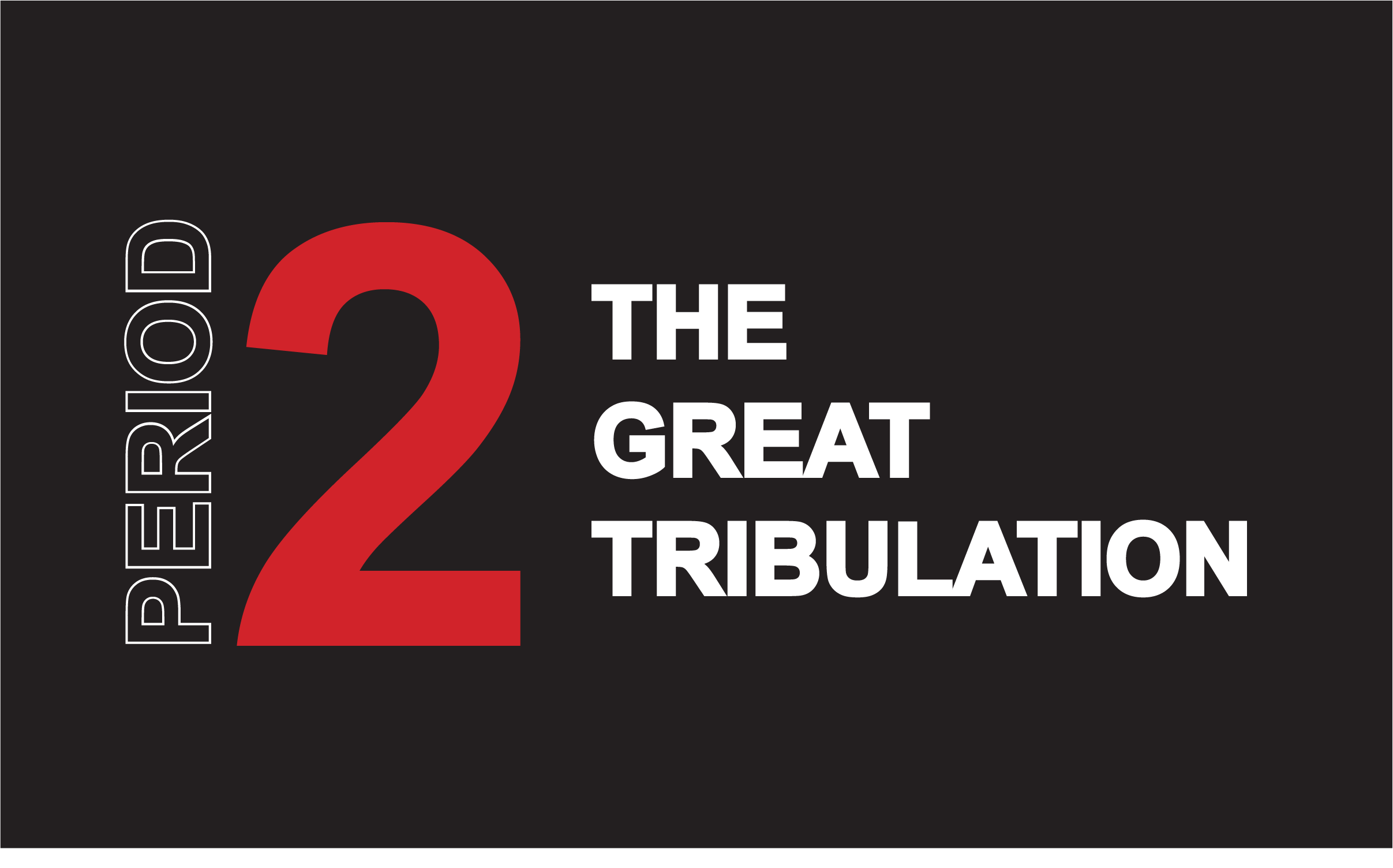 “Then you will be handed over to be persecuted and put to death, and you will be hated by all nations because of me (Matthew 24:9 NIV)

The second period is persecution…

For then shall be great tribulation, such as was not since the beginning of the world to this time, no, nor ever shall be. (Matthew 24:21 KJV)

…which is commonly recognized as the Great Tribulation.

This period begins when the Abomination of Desolation desecrates the Third Temple.

The beast was given a mouth to utter proud words and blasphemies and to exercise its authority for forty-two months (Revelation 13:5 NIV)

And according to John the Revelator, the Beast will rule this period  for 42 months. 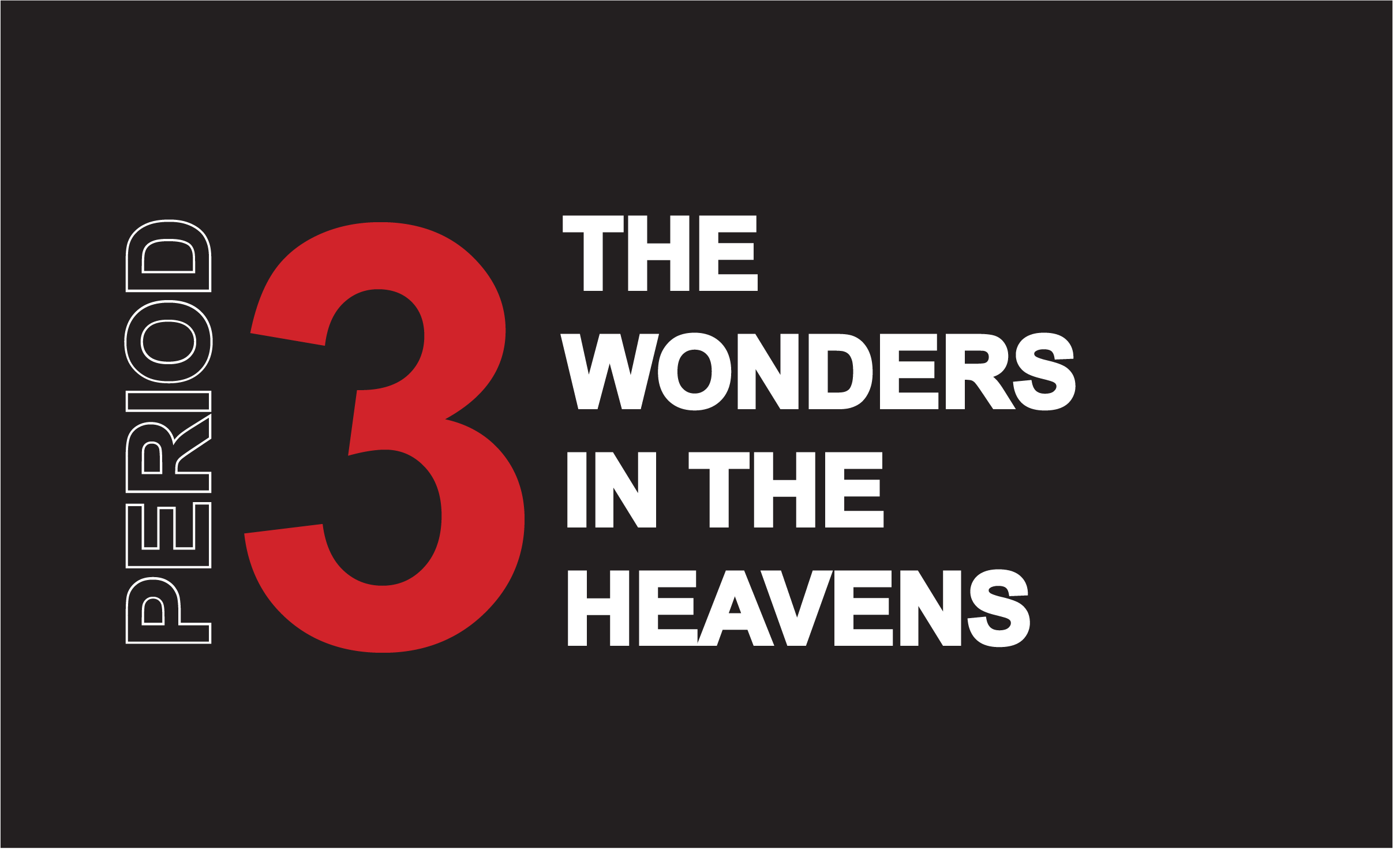 Immediately after the tribulation of those days shall the sun be darkened, and the moon shall not give her light, and the stars shall fall from heaven, and the powers of the heavens shall be shaken: (Matthew 24:31 KJV)

And I will show wonders in the heavens and in the earth, blood, and fire, and pillars of smoke.  The sun shall be turned into darkness, and the moon into blood, BEFORE the great and terrible DAY OF יהוה come (Joel 2:30-31 KJVm)

Immediately after the tribulation of those days shall the sun be darkened, and the moon shall not give her light, and the stars shall fall from heaven, and the powers of the heavens shall be shaken: (Matthew 24:31 KJV)

…which begins Immediately after the Great Tribulation.

And I will show wonders in the heavens and in the earth, blood, and fire, and pillars of smoke.  The sun shall be turned into darkness, and the moon into blood, before the great and terrible day of יהוה come (Joel 2:30-31 KJVm)

And according to the prophet Joel, before “the Day of יהוה”

These are the four periods which make up the Final Seven Years. 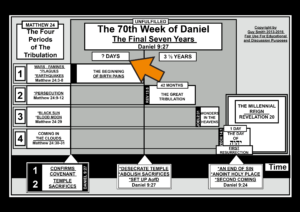 This can be accomplished by multiplying 365 days of a calendar year  times the seven years of the tribulation period.  The sum being 2555 days.

NOTE: If this is the number of days in the final seven years, then there should be passages in the Bible which total 2555 days.

So our next effort is to identify passages which total 2555 days.

We begin by identifying the duration of the last three periods of the second half of the final seven years, which can be found in the account of the Two Witnesses. 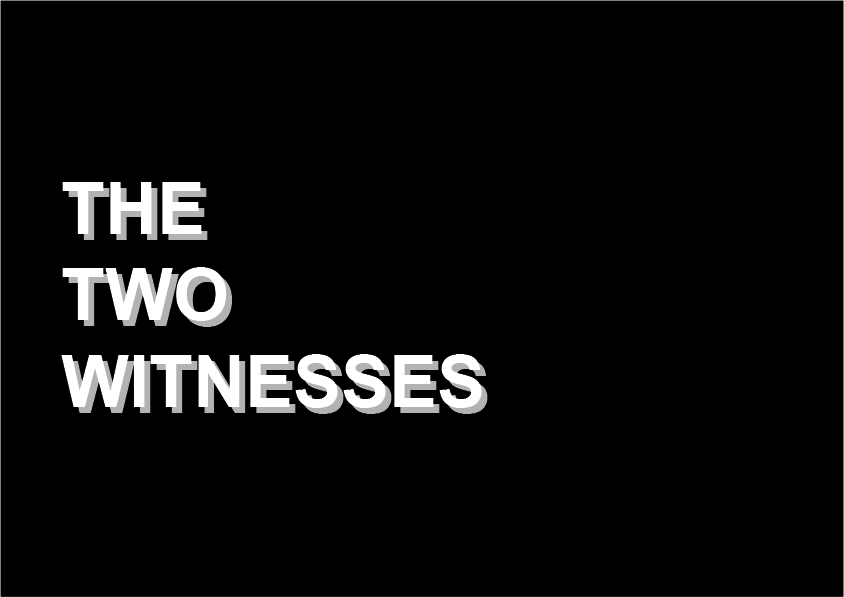 First they will prophesy for 1260 days.

Next they will be killed and their bodies will lay in the streets of Jerusalem for 3 ½ days.

And after three days and a half the spirit of life from Elohim entered into them, and they stood upon their feet; and great fear fell upon them which saw them. (Revelation 11:11 KJVm)

Then after 3 ½ days, the two witnesses will be raised from the dead…

And they heard a great voice from heaven saying unto them, Come up hither. And they ascended up to heaven in a cloud; and their enemies beheld them.(Revelation 11:11-12 KJVm)

..and with a great voice calling, they will ascend into the clouds.

This being the case, then the 1260 days that the two witnesses prophesy is the 42 months of the Great Tribulation.

And the 3 ½ days that the two witnesses lay dead in the streets of Jerusalem is the duration of the wonders in the heavens.

We now know that the duration of the second half of the tribulation period is 1265 days.

And in our effort to determine the number of days in the first half of the tribulation period, we need only subtract the 1265 days of the second half of the Week…

…from the 2555 day duration of the Final Seven Years…

So based on a 2555 day Tribulation Period, the duration of the first half is 1290 days.

“From the time that the daily sacrifice is abolished and the abomination that causes desolation is set up, there will be 1,290 days.  (Daniel 12:11 NIV)

And this outstanding 1290 day duration is documented by the prophet Daniel.

We have been forewarned of “judgment plagues” and other apocalyptic events which will occur during the Great Tribulation Period.

To protect “the Remnant” Elohim has prepared a divine Place of Refuge in order for you to physically escape this apocalyptic period.

The prophetic scriptures further provides the “confirmation of a covenant” as a sign which will indicate that the 70th Week has begun.

So when you see this 1) confirmation, in conjunction with 2) the construction of the yet-to-be-built temple, know and understand that the final count down has begun…

…and that 1290 days remain for you to get to Elohim’s Divine Place of Refuge in order to escape the Great Tribulation. 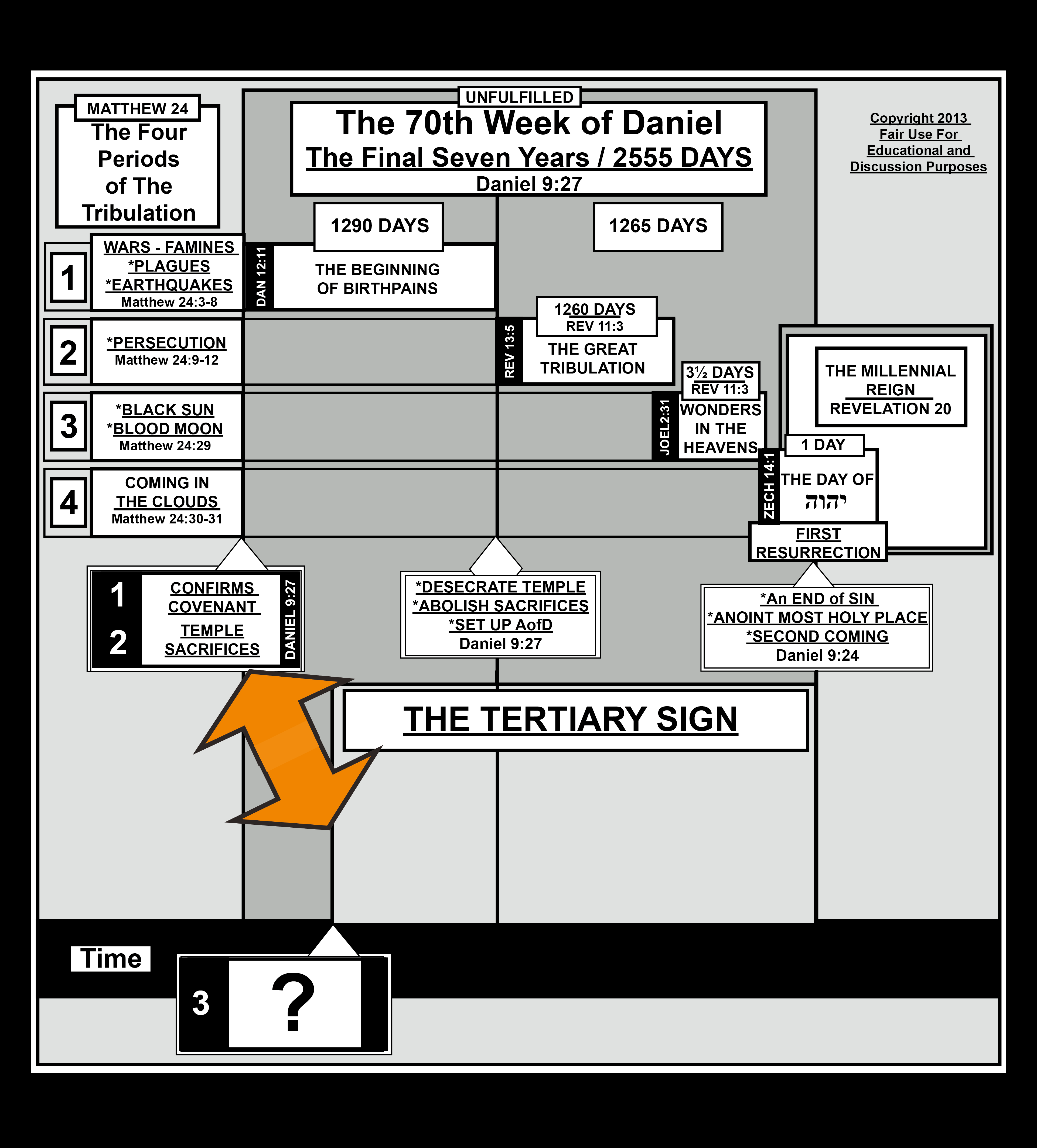 …which will occur after the confirmation of a covenant…

…and 1035 days before the start of the Great Tribulation.

Determining the details of this tertiary sign will be the focus of the next article.