For then shall be Great Tribulation, such as was not since the beginning of the world to this time, no, nor ever shall be. (Matthew 24:21 KJV)

The prophetic scriptures forewarn us of an apocalyptic period called the Great Tribulation.

And the woman fled into the wilderness, where she hath a place prepared of Elohim, that they should feed her there for 1260 days. (Revelation 12:6 KJVm)

However, John states that Elohim has prepared “a place”…

The woman was given the two wings of a great eagle, so that she might fly to the place prepared for her in the wilderness, where she would be taken care of  for a time, times and half a time, out of the serpent’s reach (Revelation 12:14 NIV)

And the woman fled into the wilderness, where she has a place prepared by Elohim, where they should feed her there for 1260 days.  (Revelation 12:6 KJVm)

…for the 1260 days of the Great Tribulation period.

Determining the location of this “place” where “the Remnant” will assemble during the Greater Second Exodus will be the focus of this article.

WITHIN THE LAND OF ISRAEL

And you shall know that I am יהוה , when I will bring you into the land of Israel, into the country for the which I lifted up mine hand to give it to your fathers. (Ezekiel 20:42 KJVm)

According to the prophets, יהוה is predicted to gather “the Remnant” back to the land of Israel.

NOT THE ENTIRE COUNTRY

And it shall come to pass, that in all the land, saith יהוה , two parts therein shall be cut off and die; but the third shall be left therein.  And I will bring the third part through the fire, and will refine them as silver is refined, and will try them as gold is tried: they shall call on my name, and I will hear them: I will say, It is my people: and they shall say, יהוה is my Elohim. (Zechariah 13: 8-9 KJVm)

However, at that time the entire land of Israel will not be a safe haven.

Unfortunately, many people that believe that there will be many places of refuge.  There is not.

And the woman fled into the wilderness, where she has a place prepared by Elohim, where they should feed her there 1260 days. (Revelation 12:6 KJVm)

Notice, that according to John the Revelator,  Elohim has prepare “a place” for “the Remnant,” not “many” places.

A PLACE DESCRIBED AS A SHEEP PEN

“I will surely gather all of you, Jacob; I will surely bring together the remnant of Israel.  I will bring them together like sheep in a pen,  like a flock in its pasture; the place will throng with people. (Micah 2:12 NIV)

The prophet Micah clarifies, that “the Remnant of Israel” will be herded together like sheep to “a place” best described as a “pen.”

There are many passages that identify this “place of refuge.”  Three of the best descriptions come from the prophets Isaiah, Joel, and Zechariah.

And there shall be a tabernacle for a shadow in the day time from the heat, and for a place of refuge, and for a covert from storm and from rain (Isaiah 4:6 KJV)

And יהוה will create upon every dwelling place of Mount Zion, and upon her assemblies, a cloud and smoke by day, and the shining of a flaming fire by night: for upon all the glory shall be a defence.  (Isaiah 4:5 KJVm)

And יהוה  went before them by day in a pillar of a cloud, to lead them the way; and by night in a pillar of fire, to give them light; to go by day and night: (Exodus 13: 21 KJVm)

…just as He defended Israel against Egypt while in the wilderness. 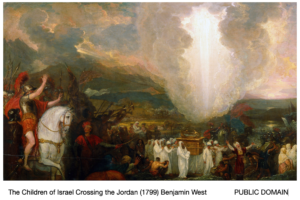 2.  The Prophet Joel confirms Isaiah by stating that Mount Zion in Jerusalem is the place of deliverance for “the Remnant” that are “called.”

Behold, the day of יהוה  cometh, and thy spoil shall be divided in the midst of you.  For I will gather all nations against Jerusalem to battle; and the city shall be taken, and the houses rifled, and the women ravished; and half of the city shall go forth into captivity, and the residue of the people shall not be cut off from the city.  Then shall יהוה  go forth, and fight against those nations, as when He fought in the day of battle. (Zechariah 14:1-3 KJVm)

3.  Zechariah further confirms both Isaiah and Joel by stating that on “The Day of יהוה ” …The Son of Man is going to battle the nations… therein protecting “the residue of the people” within the Old City of Jerusalem…

…even providing instructions to “flee” at the appointed time.

We have been forewarned of the apocalyptic period called the Great Tribulation.

We have also been provided the Old City of Jerusalem…

…as the divine “Place of Refuge,” where those of you that reach this “place” (during the Greater Second Exodus) will be protected from the reaches of the Beast for the 1260 days of the Great Tribulation.

Next: When Does the Greater Second Exodus Begin?