Then shall יהוה go forth, and fight against those nations, as when he fought in the day of battle. (Zechariah 14:3 KJVm)

Previously, we found that at the His “second coming,” the Son of Man will conquer the nations of world and establish His kingdom on earth.

… which is also the first day of the Millennial Reign.

…which will be the focus of this article.

THE DAY OF THE SON OF MAN’S RETURN

Phase one is the day of “the second coming” of the Son of Man.

It is the day of the first resurrection.

And I heard a great voice out of the temple saying to the seven angels, Go your ways, and pour out the vials of the wrath of Elohim upon the earth. (Revelation 16:1 KJVm)

On that day, the Vials of Wrath will be poured out upon the earth.

Then shall יהוה go forth, and fight against those nations, as when he fought in the day of battle. (Zechariah 14:3 KJVm)

It is then, at His return, that  יהוה will fight the nations which will be sieging the Old City of Jerusalem .

Verily I say unto you, There be some standing here, which shall not taste of death, till they see the Son of man coming in his kingdom. (Matthew 16:28 KJV)

And on that day, the Son of Man will come in the New Jerusalem…

And I John saw the holy city, new Jerusalem, coming down from Elohim out of heaven, prepared as a bride adorned for her husband. And I heard a great voice out of heaven saying, Behold, the tabernacle of Elohim is with men, and he will dwell with them, and they shall be his people, and Elohim himself shall be with them, and be their Elohim. (Revelation 21:2-3 KJVm)

…where we will dwell with Elohim…

And hast made us unto our Elohim kings and priests: and we shall reign on the earth. (Revelation 5:10 KJVm)

Blessed and holy is he that hath part in the first resurrection: on such the second death hath no power, but they shall be priests of Elohim and of The Son of Man, and shall reign with him a thousand years. (Revelation 20:6 KJVm)

All who are in the first resurrection, including “the Remnant” which will be alive to greet the Son of Man, will reign with Him during “the Millennium”…

Blessed are they that do his commandments, that they may have right to the tree of life, and may enter in through the gates into the city. (Revelation 22:14 KJV)

…from inside the New City.

And nothing unclean, and no one who practices abomination and lying, shall ever come into it, but only those whose names are written in the Lamb’s book of life. (Revelation 21:27 NASB)

The unrighteous, however, will not be allowed inside the city’s boundaries.

And it shall come to pass, that every one that is left of all the nations which came against Jerusalem shall even go up from year to year to worship the King,  יהוה the host, and to keep the feast of tabernacles. (Zechariah 14:16 KJVm)

It is then, that those who are left of the nations which the Son of Man will battle against…

When יהוה has washed away the filth of the Daughters of Zion and purged the blood of Jerusalem from her midst by the spirit of judgment and of burning. (Isaiah 4: 4 KJVm)

The Son of Man will send out his angels, and they will weed out of his kingdom everything that causes sin and all who do evil. (Matthew 13:41 NIV)

…where the Vials of Wrath will have just been poured…

And shall cast them into a furnace of fire: there shall be wailing and gnashing of teeth. (Matthew 13:42 KJV)

…which will be a place where there will be weeping and gnashing of teeth.

This is the first day of the Millennium.

THE THOUSAND YEARS THAT SATAN IS BOUND

And I saw an angel coming down out of heaven, having the key to the Abyss and holding in his hand a great chain.  He seized the dragon, that ancient serpent, who is the devil, or Satan, and bound him for a thousand years. (Revelation 20:1-2 NIV)

Then Satan will be seized and imprisoned which is the starting point of phase two.

He threw him into the Abyss, and locked and sealed it over him, to keep him from deceiving the nations anymore until the thousand years were ended. After that, he must be set free for a short time.  (Revelation 20:3 NIV)

The purpose of this imprisonment Is to prevent Satan from deceiving those left of “the nations,” which will have been cast outside the New Jerusalem.

Blessed and holy is he that hath part in the first resurrection: on such the second death hath no power, but they shall be priests of Elohim and of The Son of Man, and shall reign with him a thousand years. (Revelation 20:6 KJVm)

And out of his mouth goeth a sharp sword, that with it he should smite the nations: and he shall rule them with a rod of iron: and he treaded the winepress of the fierceness and wrath of Almighty Elohim. (Revelation 19:15 KJVm)

…over “the nations” with a rod-of-iron …

Outside are the dogs, those who practice magic arts, the sexually immoral, the murderers, the idolaters and everyone who loves and practices falsehood. (Revelation 22:15 NIV)

…which will be existing outside the holy city for the thousand years that Satan is bound.

THE SEASON THAT SATAN IS RELEASED

And when the thousand years are expired, Satan shall be loosed out of his prison, (Revelation 20:7 KJV)

And cast him into the bottomless pit, and shut him up, and set a seal upon him, that he should deceive the nations no more, till the thousand years should be fulfilled: and after that he must be loosed a little season. (Revelation 20:3 KJV)

…for an undisclosed duration the Bible identifies as a short season.

And shall go out to deceive the nations which are in the four quarters of the earth, Gog, and Magog, to gather them together to battle: the number of whom is as the sand of the sea. (Revelation 20:8 KJV)

And it is during this short season that Satan is released that the Devil will be permitted to deceive the nations outside the holy city.

And shall go out to deceive the nations which are in the four quarters of the earth, Gog, and Magog, to gather them together to battle: the number of whom is as the sand of the sea. (Revelation 20:8 KJV)

Then he will gather them in preparation for a final battle…

They marched across the breadth of the earth and surrounded the camp of Elohim’s people, the city he loves. But fire came down from heaven and devoured them.(Revelation 20:9 NIV)

…by surrounding Elohim’s people inside the New Jerusalem which have been on the Earth during the Millennial Reign.

They marched across the breadth of the earth and surrounded the camp of Elohim’s people, the city he loves. But fire came down from heaven and devoured them. (Revelation 20:9 NIV)

Then Elohim will intercede and annihilate them.

Then I saw a great white throne and him who was seated on it. The earth and the heavens fled from his presence, and there was no place for them.  (Revelation 20:11 NIV)

But the rest of the dead lived not again until the thousand years were finished….. (Revelation 20:5 KJV)

…where the unjust will be resurrected…

And I saw the dead, great and small, standing before the throne, and books were opened. Another book was opened, which is the book of life. The dead were judged according to what they had done as recorded in the books. (Revelation 20:12 NIV)

…and will be judged according to their deeds.

And whosoever was not found written in the book of life was cast into the lake of fire. (Revelation 20:15 KJV)

And death and hell were cast into the lake of fire. This is the second death. (Revelation 20:14 KJV)

… which is the second death. 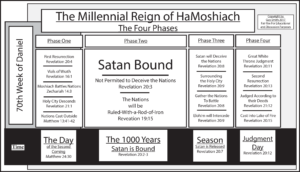 These are the four phases of the Millennial Reign.

Next:  Weeping and Gnashing of Teeth